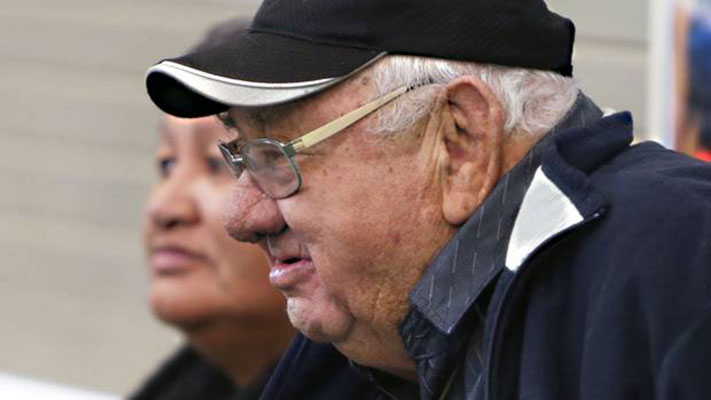 Late last week even his family remained unaware he was about to be knighted, and he and the few who were in the know were anxious the news should not leak before the embargo was lifted at 5am today.

The first thing Busby said when he did talk about being named a Knight Companion of the New Zealand Order of Merit in this year’s Queen’s Birthday Honours was that it was an honour to be shared with his late wife Hilda, who died 22 years ago.

“We worked together for our people for years,” he said.

Busby, who will celebrate his 86th birthday on August 1, began earning his international reputation as a master waka builder and navigator in 1990, when he built the double-hulled Te Aurere (although he had built a less ambitious waka the year before, for the 1990 Waitangi celebrations).

He had worked hard to develop the skills required to build waka that would not only float but would be stable, and there had never been any “trouble” on any of the voyages his craft had sailed over many thousands of miles of open sea.

“Someone has been looking after us,” he said.

It was an invitation from John Rangihau, who Busby said he regarded as prophet, to travel to Hawaii in 1984 that was the “beginning of everything,” however. Work was well under way there to restore the ancient craft of building and sailing waka, and when he was asked to name a New Zealander who might be interested, Rangihau had no hesitation in nominating Busby.

Before that he had established a reputation in the Far North as a builder of bridges. He had built about 200, he said, about 150 in what was the Mangonui County and as far south as Waipū.

Now he was building bridges between the past and the future, and the peoples of Aotearoa.

His service to Māori goes even further. He has been involved in various leadership and committee positions with organisations including the Waitangi National Trust, the Polynesian Voyaging Society in Hawaii, and Te Tai Tokerau Māori District Council. He maintains roles as senior adviser to his iwi (Te Rarawa, Ngāti Kahu, Te Aupouri, Ngāti Kuri and Ngāpuhi).

He is a kaumatua for Māori Tourism in Northland, remains a member of the Waitangi Day Organising Committee after 36 years, and continues to be involved with waka activities during Waitangi Day commemorations.

He was bestowed with a Te Wananga o Awanuiarangi Honorary Doctorate in Māori Development last year. In 1994 he was named a Member of the Order of the British Empire, and in 2014 as an Officer of the New Zealand Order of Merit.

He was also awarded the New Zealand 1990 Commemoration Medal.