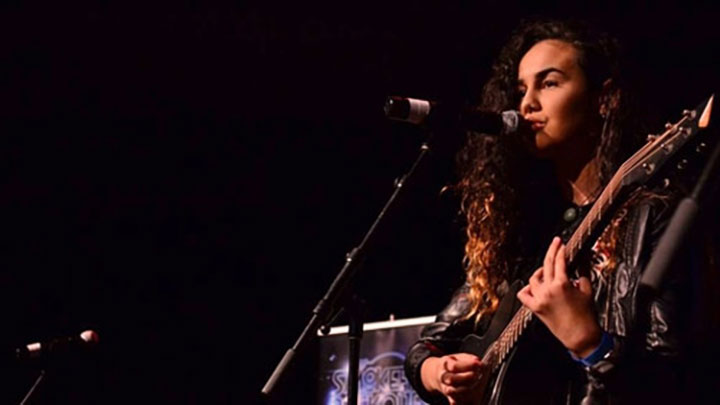 Huia Shortland looks set for solo success after taking out the Smokefreerockquest solo/duo title last night (Friday) at the Northland regional heats at Forum North on Friday. She won the national Smokefree Pacifica Beats solo/duo title last year in a duo with her cousin Izaia Tilialo, who has now left school.

Fourteen year old Huia who is in year 10 at Te Kapehu Whetu Teina plans to make music her career but was very surprised with her win last night.

“I really didn’t expect to win Smokefreerockquest as I was also entered in Pacifica Beats,” she said. “My songs are a bit funkier and groovy than the reggae sound I do with Izaia and I think it might have been that genre that made me stand out.”

Mollie Harvey from Rodney College came second, while third place went to Dani Ngakuru-Smith. These three solo-duos now put 15 mins of their best material together to submit for selection as national finalists.

The 12 top bands selected at the heats will go on the play off for the top two places and other awards at the Northland final at Forum North on Saturday 1 July at 7pm. Tickets are available from Ticketek. The 12 bands selected to go on to the final are:

Founder and director Glenn Common said the level of performance at the heats seems to keep going up every year as entrants get more support for contemporary music from their schools, make use of on line resources and have role models who have used Smokefreerockquest as a springboard to success.

“Between now and the regional final their preparation work is part of the process that makes Smokefreerockquest and Pacifica Beats such valuable learning experiences for young people,” he said. “The 12 bands going on to the finals need to practise hard, craft their set, get their supporters rallied and make good use of networking opportunties and social media to promote themselves and their achievements. For a lot of students these steps can be part of their NCEA assessments.”

Smokefreerockquest, powered by Rockshop, has national winners’ prize packages for bands and solo/duo winners that include $22,000 in Rockshop vouchers, a $16,000 NZ On Air recording, video and promo package a ‘Decent Exposure’ campaign on The Edge TV, and a photo shoot and branding package from Imaginary Friends. There is also the MAINZ (Music and Audio Institute of New Zealand) Scholarship for Outstanding Musicianship, the APRA Lyric Award, the Lowdown Best Song Award, Smokefree Vocals Award, and the People’s Choice voted by text with the opportunity to open the Smokefreerockquest national final.