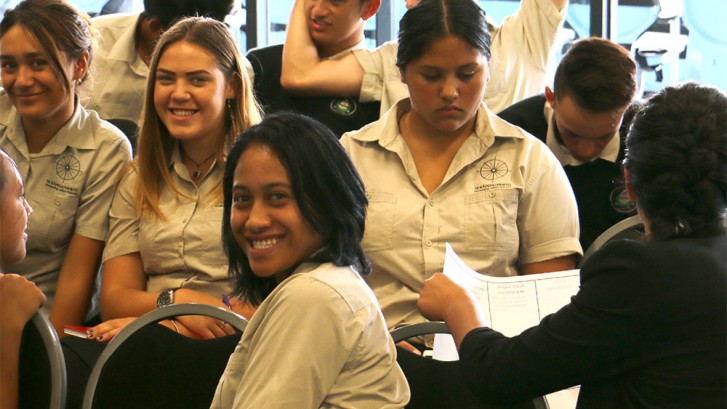 Due to the building of our fence all cars dropping off and picking up ākonga are to do this at the far end of Paenuku by the playground so we don’t disrupt the contractors.

This applies to all staff and parents.

Paenuku has limited shade and at times the sun is literally beating down on ākonga. It is our kaupapa to be SunSafe and we are asking that whānau support us with this.

Paenuku potae are available at 185 Lower Dent St for $13 each. Whānau need to purchase these asap.

Thank you to all whānau who tautoko this kaupapa. While we are seeing a reduction in pies and noodles, we are slowly seeing an increase in other non healthy kai such as sausage rolls, hot chips, McDs and Chinese takeaways.

Please tautoko this kaupapa by not sending your child/children to Paenuku with this type of kai. Ngā ākonga involved with the business studies class launch their first product this weekend at the Pasifika Fusion Festival in Whangarei.

The students have been working hard behind the scenes to get ready for the launch and will be selling a range of nutritional health beverages aimed at creating a healthier and fitter community.

The product launch is also the first entreprise launched under the Rangatahi Inc initiative.

Whānau are encouraged to visit the stall and sample their products. They will be set up near the gym opposite 185 Lower Dent St.

Adapting Shakespeare to a place and a culture Shakespeare himself could have had no concept of is, in itself, a big ask. Doing so for a single player is a whole other ballgame.

But that’s what deviser Regan Taylor has sought to do with Solothello.

Delivered in a combination of Shakespearean language, modern dialect and Te Reo Māori, Solothello embodies four characters from Shakespeare’s text: Othello himself, Lago, Roderigo and Desdemona, with other characters invoked and engaged in conversation but not present on stage.

The production is coming to Te Kāpehu Whetū on March 16 with one show at 10am. Entry is open to whānau and costs $1.

One of last year’s students, Josh Rawson, is behind the move to bring the production to the North.

Look what they found (above). And getting their feet wet… ākonga investigate further (right).

On Monday 22nd Feb Takurua (Year 11) Science class visited the Waitaua awa. The Waitaua starts above Dip road in Kamo before winding its way down behind the industrial area behind Pipiwai Road then on through the mixed boundary of farms and residential area of Tikipunga to the Whangarei Falls.

The awa provides a great opportunity for our ākonga to gather data to measure the impact of human activity on a freshwater ecosystem and gain level 1 NCEA credits. Ākonga compare environmental factors such as bush cover, algal growth, species of invertebrates present, water clarity and water temperature from two sites.

The first site is Hodges park in Kamo where the awa has been relatively unaffected by activity of people. The second site is the falls after the awa has flowed through light industrial, urban and farming areas.

This activity provides our ākonga with the opportunity to better understand the signs of the health of the awa in a measurable way.

Our thanks to Whaea Soozee McIntyre and others from the Whitebait Connection Programme who helped us with our mahi at the awa. Whitebait Connection are involved in many projects such as raising native plants and riparian planting and provide a great partnership for our ākonga to learn about our awa and do hands on mahi.

Te Ataarangi classes are being offered free of charge to whānau.

Pereri Mahanga has offered to provide classes for whānau and staff, and will be held on either Tuesdays, Wednesdays or Thursdays from 4pm until 7pm,  depending on expressions of interest.

There must be a minimum of 15 people for a class to run and whānau are expected to commit fully to the weekly class which will run for approximately 15 weeks.

Please contact the school office to confirm your interest and preferred day as soon as possible.  Classes will be confirmed on Friday 26 February After a solid start last week, TKW’s league team went down 32-20 to Kamo High on Wednesday.

The game started in a high tempo with some classy runs from Diani Timms, Nico and Kaharau as TKW surged onto attack.

However attack soon turned to defence as Kamo starting making headway into TKW through their big forwards.

It was an exciting game with the score see-sawing throughout. Henare Beattie was outstanding playing in an unfamiliar position in the centres.

The boys take a two week break before their next game.

This year we have five teams entered: three senior boys and two senior girls teams.  The cost is $80 per team and games will start at 9am and finish at 3pm.

Players should bring lunch, as well as a water. There is also a café onsite.

Whānau are not permitted to take photos at kura events in our controlled spaces without prior approval.

We appreciate there are times and events where whānau are trying to capture moments involving tamariki. However that is difficult when non-whānau are photographed as well and as an organisation we have to respect the privacy of others who for whatever reason do not want their image or that of their children taken or recorded.