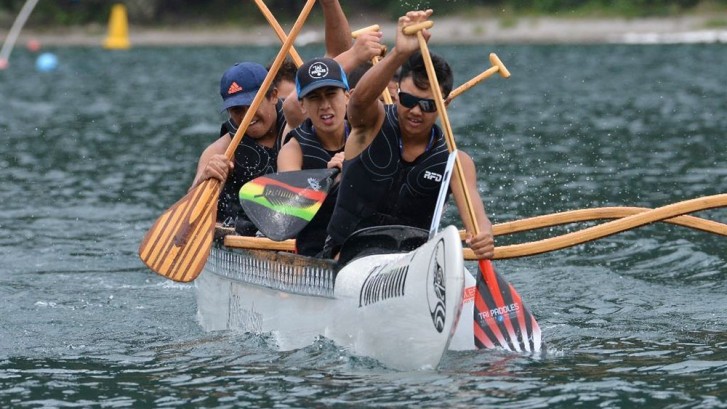 Rangatahi Inc Ramps Up for Business

Rangatahi Inc is ramping up its business with ākonga readying to test their products in the market place in the second term.

The Kura’s entrepreneurial programme, Rangatahi Inc, has had a busy first term taking part in the Young Enterprise Scheme (YES) E-Day at Toll Stadium, running a stall as part of the Pasifika Fusion Festival in Whangarei at the end of February, as well as working with Northland Inc on the creative brief for a new set of promotional images promoting Tai Tokerau to international tourists. Paora Allen (above) works on the branding for Rangatahi Inc.

Rangatahi Inc tutor, Aroha Vause, said despite the busy and hectic workload, the business ākonga had been diligent in developing products and their brand to test in the market place next term.

“It’s been a bit of trial and error getting their products ready to test, but they’re a good bunch who have applied themselves well,” she said.

“There’s a lot of things competing for their time and juggling and managing those priorities is one of the challenges, but also a valuable lesson in developing a business.”

Rangatahi Inc is developing a business case to establish a café that will produce organic, healthy, nutritional products based on traditional ingredients.
One of the ākonga, Paora Allen, said the processes to developing business were eye-opening.

“We’re pretty proud of what we’ve developed and where we are, but the proof will be when we go to market,” he said. In Case You Missed It

The Northern Advocate recently profiled another Rangatahi Inc. initiative that will help promote Northland and Māori culture in a tourism project that will be seen around the world. The full article has been reproduced here.

The final practices for the Tai Tokerau Festival will be held all day on Monday, April 11, finishing at 6pm, and during school time – as needed – on Tuesday and Wednesday.

Final organisation details for the festival will be sent home in a separate pānui on Monday. The ‘Festival 40’ rehearse for the Tai Tokerau Festival.

All ākonga in Years 7 and 8 are to wear their highest standard of school uniform. Those that already have number one uniform are welcome to wear it. Boys and girls: no jandals and only plain black shoes are acceptable.

See the flyer (attached to this week’s pānui) for information about what kai is available for purchase at the festival. Remember that whānau must supply a packed lunch for your tamaiti/tamariki or money to buy lunch.

The kapa haka group will perform a dress rehearsal in the gym on Monday 11th April at 5.30pm – nau mai, haere mai.

Thank you to all whānau who have returned the blanket EOTC form that was sent home last week and this week. Please collect one from the kura office (or download here) if you have not yet done this. Any ākonga who has not returned this by next Wednesday will not be able to travel to the festival so please get those signed and back to us urgently.

The Education Review Office (ERO) was onsite this week.

“Overall they were hugely impressed with the Kura and having them onsite has helped us to identify some gaps in our systems and processes,” she said.

The Senior Boys A volleyball side have won the right to play the best in the country after a tough week at nationals that saw them come runners up in their section, losing three sets to one to Long Bay College from Auckland in the final.

However the A team will move up to division one after placing second in division three.

The Kura had two teams at the NZ Secondary Schools National Championship in Palmerston North during the week.

The Senior Boys A team booked a place in Friday’s final after overcoming Bishop Viard College from Wellington three sets to one in the semi-finals of division three on Thursday. In an evenly contested match, TKW won the first two sets 27-25 and 25-21 before losing the third 16-25. They had too much fuel in the tank and won the fourth comfortably 25-18.

Their quarter finals was an intense encounter against Gisborne Boys. After winning the first two sets comfortably, Gisborne fought back to take the next two 25-19 and 25-23. In the final set the Kura’s boys stepped up another notch winning 15-11 and booking a place in the semis.

In pool play, the Senior Boys A team won two of three matches, their only loss coming against Aranui High from Christchurch.

The Senior Boys B team was largely made up of junior players gaining experience for their own tournament at the end of the year and played in the fifth division. The B team played 10 games during the week and won two against Whanganui High and Auckland The Senior Boys A team in action at the nationals in Palmerston North.

“When you compare the types of athletes our boys have come up against during the week, you appreciate the scale of their success,” he said.
“This is the single biggest secondary schools sporting event in the country and these schools don’t come to play tiddly winks. They’ve come with one thing in mind and that’s to win and some spare no expense making sure they send nothing but the best to represent them at volleyball nationals.”

Jason said the boys have a good measure of where they sit in the national picture and both teams had represented the Kura proudly.

“At the end of the day you can’t ask much more than what they gave. Our top team were phenomenal but that doesn’t take anything away from what our B boys achieved. They got a taste of the big time and are primed for their own age group national competition at the end of the year.”

The Kura’s waka ama paddlers have returned home winners after a week of competition in Rotorua.

Their coach, Papa Ralph [Ruka], said the Kura should be proud of the achievements of its ākonga.

“It’s been a massive week for them,” he said. “With over 200 different races throughout the week and more than 80 schools competing, for our Kura to do as well as it has is a testimony to their kaha and fortitude.” While the paddling group has experienced both individual and team success, Papa Ralph said it was important to acknowledge the achievements of all the paddlers.

“One of the beauties of waka ama is it’s a whānau sport. Everybody can participate in a competitive environment. When one member of the whānau does well, everyone celebrates and shares in the accolades. It’s one of the special qualities we have as Māori.”

It’s the third year Te Kāpehu Whetū has competed at the waka ama nationals. Following on from the moderate success the paddlers enjoyed last year, Papa Ralph said the ākonga had raised their achievement levels another notch.

“The achievements at this year’s nationals sets a new standard for future events which will be something to look forward to.While we missed out in some of our finals, our kids were the bomb. They learned so much and saw the bigger picture of waka ama, how many other kura are involved and love the sport. Proud, proud, proud as of them. Pīki mihi to my kai awhina Dallas (my right hand woman), our new manager, Whaea Pam, and Mama Liz. Thank you all so much for your contribution to making this a successful, easy and enjoyable week.”

The list of achievements for the 2016 waka ama paddlers were as follows:

U13s will train on Monday and Wednesday from 4.00 – 5.30 at the Kura. Mouthguards and boots are necessary.
All queries to Whaea Dallas in the sports department.

Netball Teams fees are due:

Pānui for the Ngāpuhi engagement hui are available in PDF format here:

The Leadership Academy of A Company is running two selection courses during the coming holidays. The boys involved will bring home permission slips before the Kura closes for the first term break.

A gentle reminder the Paerangi Whānau hui is Monday, April 11, starting at 5pm to 6pm. This will be followed by a dress rehearsal for the Tai Tokerau Festival and a barbeque. Please bring a plate.

Whānau who have ākonga sitting NCEA this year will find a copy of the NCEA information booklet and exam timetable accompanying this pānui, and both documents were sent home with ākonga previously.

There is some important information and key dates for our Level 1 -3s:

Please ring/contact the office for any absences. We are finding that whānau are not answering their phones or returning messages when the Kura inquires about absenteeism.

Having a bus service that caters for ākonga who travel from afar is a privilege and it is a timely reminder to whānau and ākonga of their obligations when using this service.  The following guidelines will be in place for all ākonga using this service:

The bus service is an extension of our Kura so we expect that all ākonga will respect the bus property at all times, the same way they respect our Kura.

Ākonga who are found to be causing serious disruptions on the bus will be removed for either a day, week or indefinitely until issues are resolved with whānau.

Any queries about this kaupapa to Maia Henare.

With an increase of 70 new ākonga there has been a notable increase in pilfering and theft.

We are working on a strategy to combat this and identify the one’s responsible, in the meantime we ask whānau to check their tamaiti’s bag on their return from Kura to ensure they haven’t come home with something that doesn’t belong to them.

We also ask parents to refrain from sending their tamaiti to Kura with valuable items. The U19 Girls team in action at the Waka Ama Secondary Schools nationals at Lake Tikitapu in Rotorua this week.

The victorious U16 Mixed W12 Bowl finalists show celebrate third place during the medals ceremony. While (right) Papa Ralph showcases another side to his repertoire. On March 30, Year 13 Biology went on a fieldtrip to sample the Waitaua River catchment as part of their assessment. They sampled three different sites along the catchment to see if they could find a pattern or relationship, and collected a range of data which included water temperature, pH, conductivity, collecting and identifying invertebrates and more. Year 13 ākonga Taleah Bryers said: “…from this we gained a lot of information. It was a good trip and all of us students thoroughly enjoyed it.”

shots from around the Kura this week